1.1 – The regatta will be governed by the rules as defined in The Racing Rules of Sailing.

1.3 a – US Sailing Prescription Appendix T, sections A, B, and D will apply.

1.4 – Rule 41 Outside Help is modified so that the Butterfly, Optimist, and MC classes, who capsize, may receive outside assistance, without penalty, and may continue to race.

1.5 – Only one sail number may be used for each boat. Any changes must be approved by the race committee chairman.

Notices to competitors will be posted on the official notice board at the White Lake Yacht Club.

3.1 Changes to the Sailing Instructions

Changes to the Sailing Instructions will be posted before 0900 on the day it will take effect.

3.2   On the Water Changes to the Sailing Instructions

On the water changes to the Sailing Instructions will be given after the L flag is displayed on the signal boat. Changes will be announced on the designated VHF channel and also by Loud Hailer. This changes RRS 90.2 and Race Signals.

4.1 – Signals made ashore will be displayed on the flagpole in front of the Yacht Club.

4.2 – When flag AP is displayed ashore, it means that the race has been postponed. The warning signal for the next race will not be made less than 30 minutes after the AP is lowered. This alters RRS racing signals.

5. Schedule of Races – Posted times are for the warning signal.

7.1 – Race Course Illustrations will be posted on the Official Notice Board

7.2 – No later than the warning signal, the race committee signal boat will display the courses and the approximate compass bearing of the first leg.

7.3 – An “Offset” mark may be set 90 degrees at a distance of approximately 50 yards from the windward mark. If the Windward mark or the offset mark is missing, and no Code Flag “M” is displayed in its place, only the remaining mark shall be left to port.

7.4 – E, C, Laser, and MC Scows will use a gate mark for all races. Boats shall sail between the gate marks from the direction of the previous mark and round either gate mark. If either gate mark is missing, and no Code Flag “M” is displayed in its place, only the remaining mark shall be left to port.

8.4 – The Race Committee Signal Boat may deploy a “keep away” buoy, which shall rank as a starting mark.  Any boat touching this buoy will have broken rule 31 and shall act in accordance with RRS 44.1.  Boats shall not pass between this buoy and the Signal Boat when approaching the line to start.  The area between the limit mark and the Signal Boat does not rank as an obstruction for the purposes of RRS 18, 19 and 20.

9.1 – Races will be started by using rule 26, with the warning signal given 5 minutes before the starting signal.

9.2 – The starting line will be between a staff displaying an orange flag, on the race committee boat at the starboard end of the line, and the course side of the port end starting mark.

9.3 – Boats whose warning signal has not been given shall avoid the starting area.

9.4 – A boat starting later than 10 minutes after her starting signal will be scored Did Not Start.  This changes Rule A 4.

Individual recalls will be signaled in accordance with RRS 29.1. The race committee will endeavor to hail any boat recalled on VHF channel 73 and also by loud hailer.  Failure, to receive a hail, of a hail to be made, or the order of hails made, shall not be cause for redress. Radio calls will not be made for the Laser, Optimist, and Butterfly classes.

11.  Change of the next leg of the course

11.1 – To change the next leg of the course, the race committee will lay a new mark and remove the old one [or finish line] as soon as practicable.  When in a subsequent change a new mark is replaced, it will be replaced by an original mark.

11.2 – Course changes of less than 5 degrees may be made with no signal and no change of mark color. This changes RRS 33.

12.1 – The finish line for all fleets, except the Laser and Butterfly fleets, will be between a staff displaying an orange flag on the race committee boat and the nearby finishing mark.

12.2 – The finish line for the Laser fleet will be between a staff displaying an orange flag on the race committee boat and the nearby pink finishing mark.

12.3 – The finish line for the Butterfly fleet will be between a staff displaying an orange flag on the race committee boat and the nearby green finishing mark.

13.1 – After a race, a boat that may have broken a rule of Part 2 or Rule 31 while racing may take a post-race penalty for that incident.

2.) 30% if taken after protest time limit but before the beginning of a
hearing involving the incident. [Min. 3 places]

14.2 – Boats who have not finished their race in 2 hours and 15 minutes will be scored points equal to the number of finishers plus 2 points.

15. Protests and Request for Redress

15.2 – Protest forms are available at the race office.  Protests shall be delivered there within the protest time limit.

15.3 – For each class, the protest time limit is 60 minutes after the last boat in the class has finished the last race of the day for that class. The same time limit applies to protests by the race committee and protest committee about incidents they observe in the racing area and to requests for redress. This changes rule 61.3 and 62.2.

15.4 – Notices will be posted within 30 minutes of the protest time limit, to inform competitors of hearings in which they are parties or named as witnesses. Hearings will be held in the jury room located at the White Lake Yacht Club beginning at the time posted on the notice board.

16.1   Rule 44 is modified to allow a boat either to take the penalty described in RRS 44.1, 44.2, and as modified by these Sailing Instructions while on the water or to take a 40% Scoring Penalty for a breach of a rule of Part 2 after the incident but prior to the protest hearing by acknowledging the infringement before arbitration or by accepting the opinion of the arbitrator.

After a protest has been lodged, one designated representative from each boat, who shall have been on the boat when the incident occurred, may appear together before an arbitrator appointed by the protest committee.  No witnesses shall be allowed. The arbitrator will have each party describe the incident, limiting each party to approximately two minutes.

After hearing the testimony, the arbitrator will express one of the following conclusions:

2.) A rule was broken by one of the boats involved.  The representative of the offending boat has the option of either accepting a 40% penalty or submitting the matter to the protest committee for a protest hearing.  If the penalty is accepted, the matter is closed and cannot be submitted to a hearing, be reopened, appealed or submitted for redress.

16.2 – Application of the 40% penalty shall be calculated in accordance with rule 44.3, except that the penalty is modified to read 40%.[ Minimum 4 places]

17.1 – The low point scoring system in Appendix A of the RRS will apply.

17.2 – There will be one throw out race allowed per fleet after that fleet has completed at least six races.

17.3 – 2 races must be completed for a class to constitute a regatta.

18.1 – Each competitor, including skipper and crew, Parent or legal guardian, is ultimately responsible for such competitor’s safety.

18.2 – A boat that retires from a race shall notify a RC boat before leaving the racing area, or if that is not possible, notify a regatta official at Regatta headquarters immediately upon arrival on shore.

18.3 – Boats that are not leaving the harbor to race shall inform Regatta headquarters or a regatta official prior to the start of the first race of the day.

19.1 – A boat shall neither make radio transmissions while racing, nor receive special radio communications not available to all boats.

A designated observer may report all visual signals displayed by the race committee on VHF channel 73.  Information provided is provided as a courtesy to the competitors and does not in any way alter the competitor’s responsibility to observe the Race Committees visual signals, which govern the conduct of the racing.  Errors or omissions on the part of the designated observer will not be considered as grounds for redress under RRS 62. Radio calls will not be made for the Laser, Optimist, and Butterfly classes.

Prizes will be awarded as described in the notice of race.

Competitors participate in the regatta entirely at their own risk, see RRS  4 decision to race. The organizing authority will not accept any liability for material damage, or personal injury, or death, sustained in conjunction with, or prior to, during, or after the regatta. 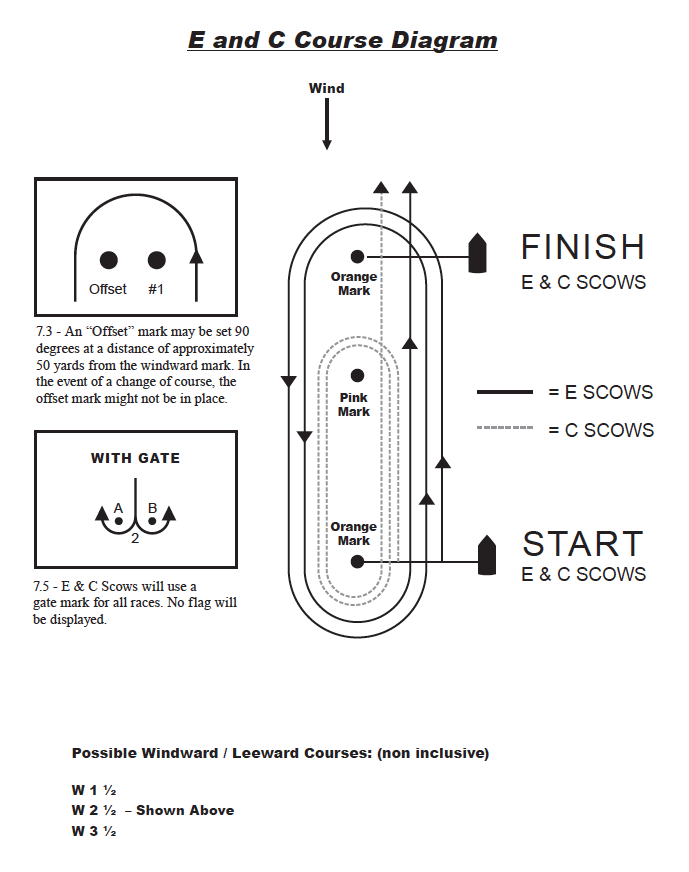 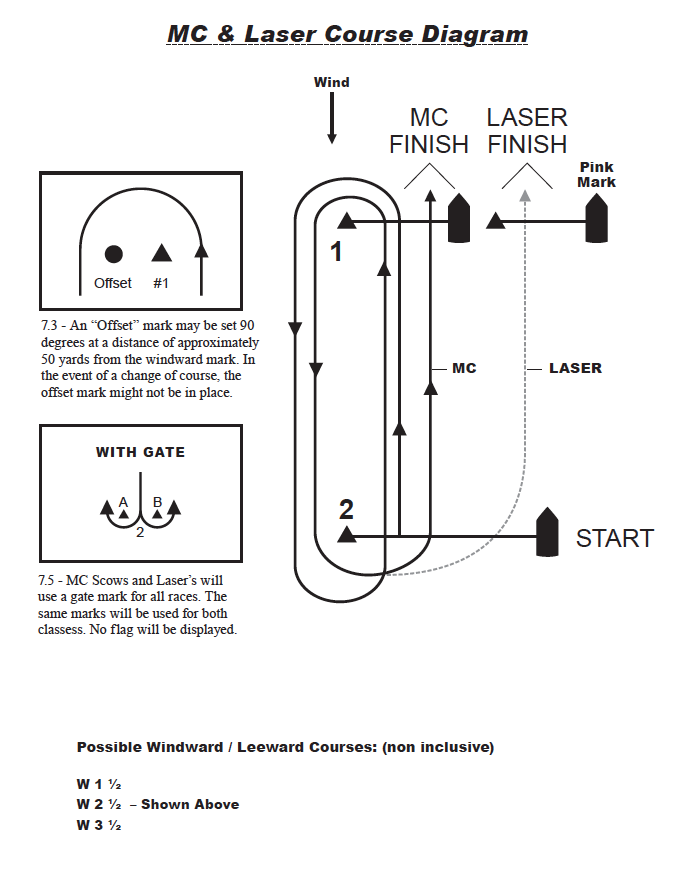 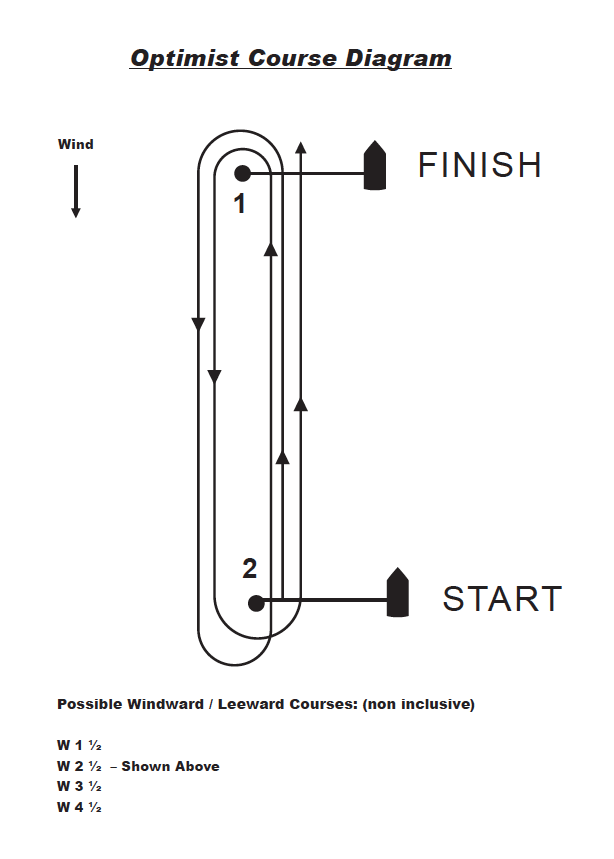